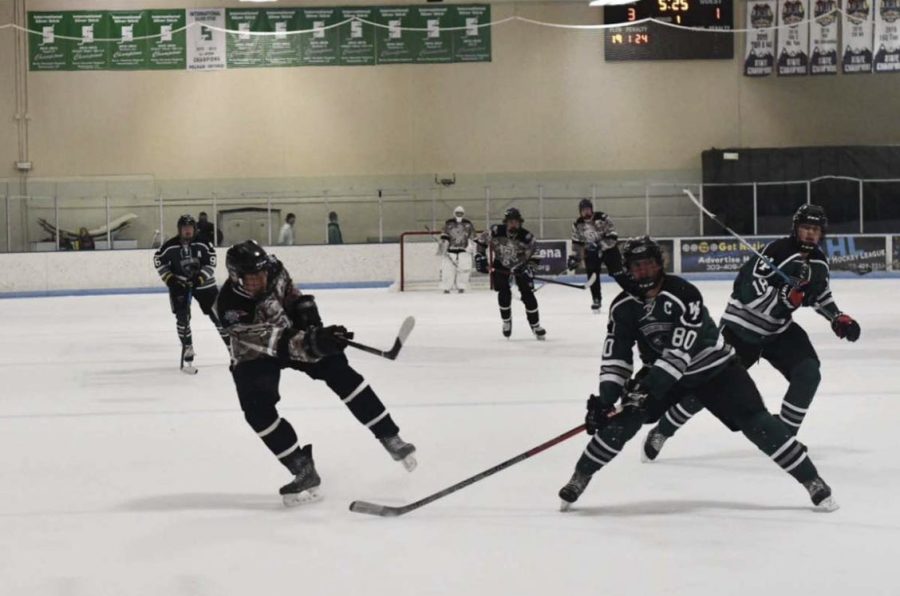 The Dakota Ridge Varsity hockey team took a 12-2 win against Woodland Park High School on  December 10th at the Edge Ice Arena. The game was dedicated to the military and U.S. veterans with a ceremony held before the game to commemorate.

The team played strong throughout, the win seemingly locked-in by half, Dakota already having a several point lead. After that, the team was sailing from there, racking up the points scored by multitude players, including a defender getting a hat trick.

With a team composed of several high schools including Dakota Ridge, Chatfield, and Columbine, the Dakota Ridge hockey game included a diverse group of boys that bond over their love for hockey and their shared skills.

Holden Spence, a junior at Dakota Ridge on the varsity hockey team, has been playing hockey since he was young.

“Hockey has always been a huge part of my life, and I’m excited to keep playing with the guys on this team. This season is looking really promising, and hopefully we can make it far,” Spence said.

Almost as important as the game is the fans. The school spirit and support is overwhelming at most Dakota Ridge games.

“There is nothing better than having all of my friends cheering me on during the game,” Spence said. “I always play so much better when there’s a big student section.”

Support was brought in truck loads at the game, with a constant hum of cheering and the explosion of shouting after every goal.

“Some of my favorite moments are while I’m at games, in the student section, cheering for my team and being with my friends,” Dakota Ridge senior Andrei Zamfirescu said. A leading member of most Dakota Ridge student sections, Zamfirescu brings the excitement into the hockey season by attending every home game this season. The ruckus he and many other students made demonstrated the energy that is going to fuel the team throughout the season.

The Dakota Ridge varsity hockey team continues to go strong as they blaze through the season, skating for as far as they can, with State Championships on their minds.