Thrifting – Is It Actually Worth It? 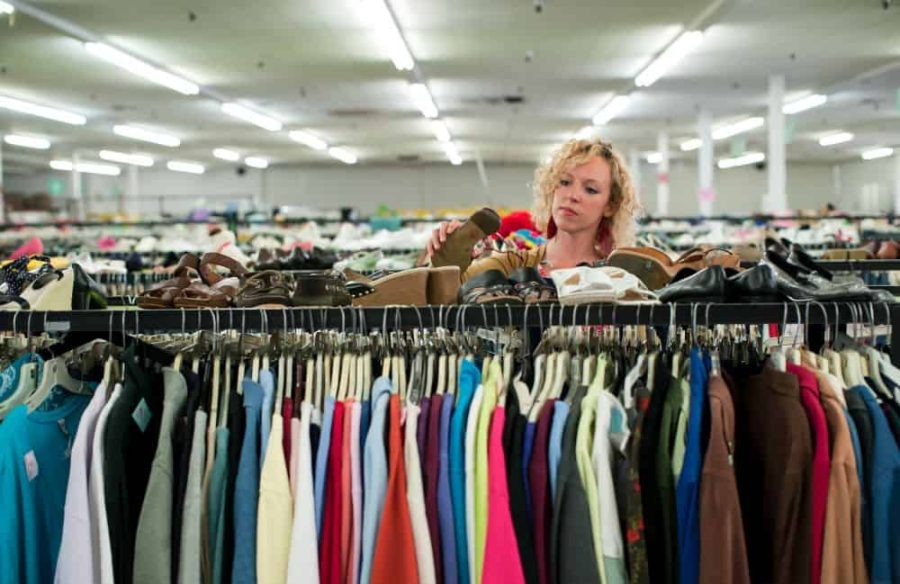 Thrifting has surfaced as a popular way of getting clothing, and many have found themselves browsing the overflowing racks of cheap clothes in thrift stores all around. Some people swear by it while others aren’t convinced, as it seems too good to be true — fashionable, wearable, and eco-friendly clothing that typically ranges between $3 to $20 does not seem like an actual reality. So is it?

Fast fashion is an industry that dominates our modern world. Mass producing trendy clothing, the trends then die, and the excess waste of clothing and fabric end up in landfills and waste piles.

Approximately 92 million tons of clothes-related waste is produced each year due to fast fashion. According to the UN Environment Programme, 20% of global water waste is from textile-dying in fast fashion — the toxic dyes contaminate the water and many times gets recycled into rivers and oceans damaging the environment and wildlife. The list goes on for the environmental impacts and hazards around fast fashion; it’s clear that there must be another answer.

Thrifting is a seemingly better alternative to fast fashion, but is it actually better? Thrifting is buying second-hand clothing; therefore, instead of clothing going to dumps, it has a second chance to be worn and loved. Although not a perfect solution, mainly because the high amount of second-hand clothing is a consequence of fast fashion, it’s an alternative worth looking into.

So you want to start thrifting — where do you begin? Don’t fret, I’ve already done half the research for you to make a comprehensive guide.

First you must decide what thrift store. There are many different types of thrift stores that equally have their pros and cons, simply depending on preference. But I have gone and experienced many of these stores to get the best detailed review of each one.

Goodwill, Arc, Plato’s Closet, antique stores, and more all fall under the category of thrift shops, but which is best to begin thrifting?

Plato’s Closet is a rapidly growing retail franchise that buys and then resells second-hand clothing. Unlike most other thrift stores that are non-profit and take free donations, Plato will pay you a few dollars to sell them your unwanted items that they then resell at their location. Also unique to this store is that they thoroughly comb through all clothing brought to them, only selecting clothing that is on-brand and in good condition.

This is an entirely different approach than most other thrift stores that seemingly eliminates the majority of problems second-hand retailers face with cleanliness, item value, and clutter/organization. Plato’s closet is significantly cleaner and more modernized compared to the other thrift stores on this list. The store itself is decorated nicely and is well-organized compared to its sibling stores, Goodwill and Arc. Its items fit in with trends and are of good, reliable quality — guaranteed. The time taken to sort and organize every item by hand, plus the big name brands, make the prices slightly more expensive, usually not dropping below $8 per item.

Unfortunately, Plato’s Closet doesn’t help eliminate the problem of fast fashion much at all. The company turns down large amounts of perfectly fine clothing simply because they aren’t on trend. In actuality, Plato’s Closet is doing almost exactly what fast fashion retail stores are doing, but second-hand. Nonetheless, shopping from here instead of other stores is still a better option, even if it isn’t the best.

Plato’s Closet would not be my most recommended thrift store because of its lack of unique and diverse pieces and its catering towards fast fashion. I believe that removing pieces simply because they aren’t on trend ruins the purpose of thrifting, but it guarantees that you’ll find good items, so it’s a great store for beginners and those who are too impatient to sort through tons of clothing.

Antique stores are a different type of thrift store compared to the rest of the stores on the list. Antique stores allow individuals to sell their unwanted collector items in stores by either renting out areas of the store or giving them to the store. These stores are typically much less clothing oriented than other stores because they tend to focus on decorative pieces and art.

I have bought clothing from antique stores before, and I’ve enjoyed all of my visits. The prices are significantly more expensive, usually due to the rarity and authenticity of the items. Items usually don’t drop below $12 per item.

Cleanliness in these stores is typically not a problem as they, too, are particular about what items they are willing to take, and because of their higher values.  All the items are well taken care of and in good condition.

Overall, antique stores wouldn’t be my most recommended stores because of their expensive prices and lack of actual clothing, but they are definitely worth the occasional visit. The experience is unique and magical and something everyone should see at least once.

Arc is what most expect when they think of a thrift store. Clothing is donated, lightly combed through, and displayed in the store. The clothing is cheap and unique, qualities that I require thrift stores to have.

Unfortunately, the majority of my experiences with Arc stores have been average: the organization is mediocre and slightly messy, and the racks are typically so overflowing you can’t slide the hangers to look at the items. The layout of items is ill-logical and difficult to figure out, making it hard to efficiently retrieve what you want. Accessory items such as shoes and bags are plentiful, from my experience, which is a large benefit.

I have bought multiple items from Arc that I still cherish and use to this day. I believe there are better options out there, but this store can be a great introduction to thrifting and to start your journey of buying mainly second-hand.

In my research, I have found Goodwill to be the best thrift store overall for both beginner and expert thrifters. The non-profit store can be found nationwide allowing it to be an option for just about anyone.  In my experience with the store, employees are nice, the store is somewhat well organized, cleanliness varies with each store but is relatively hygienic, and more often than not good items can be found. With consistent thrifting and practice, you can begin to leave each thrifting trip with at least a handful of unique and cool pieces.

Goodwill stores can come in two different ways: the retail stores or the outlets/bins. Goodwill outlets are the last chance for items that did not get sold in the retail stores. The clothing is brought out in large bins that are rotated out regularly for new items. Typically outlets charge customers $1.29 per pound, making the clothing extremely cheap. For cheap prices, cleanliness is compromised. The clothing items in outlets are not cleaned or gone through once they are brought from the stores to the bin, and there is little to no organization or sorting. Depending on the store, the conditions can be more or less severe. Goodwill retail stores are more practical, but outlets are a great way to find lots of clothing for very little money, if you don’t mind getting elbow-deep into some bins of clothing.

Overall, Goodwill is a great store to begin your thrifting endeavors because of its practicality, cheap prices, and easy to navigate stores. Although the store likely has their moments of disarray and uncleanliness, under the circumstances, it suffices.

In my opinion, coming from someone who has been thrifting for almost six years now and who has been to all of these stores on multiple occasions, I would undoubtedly give Goodwill the title for best thrift store. I would estimate almost 90% of my closet has been purchased from second hand/thrifting, and of that, 99% is from Goodwill stores.

By finding a location that you like and is consistent, learning the layout and item placements, and just practicing, you can easily achieve a successful thrift trip almost every time you go.

When first getting started it may be very discouraging because of how overwhelming the sheer amount of clothing is, along with what might appear to be trash that seems to bury all the hidden treasure, but learning how to have a skillful eye to look for good items and seek out the potential in what seems to be trash will make thrifting worthwhile.

So if the first couple of times aren’t that fruitful, try again. Go to a different store, keep looking, and don’t give up. The time and effort put into becoming an expert thrifter will be well spent, and you’ll thank me in the long run when you have a closet full of clothing unique to you, that you spent no more than a couple of bucks on. That satisfaction is worth every weird item you have to sort through in between.