Shades Passing Through: A Passing Review 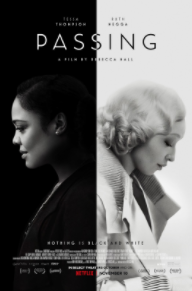 Jazz music can be heard throughout the movie to develop the time period of the Harlem Renaissance.

Feeling detached from her childhood and  having to always calculate her actions to ensure that she does not expose herself, newlywed Clare Bellew’s whole life depends on others believing the facade she reflects on the world.

The Netflix movie Passing, released October 27, 2021, directed by Rebecca Hall, and based on a novel written by Nella Larsen, is set in New York 1929. With a PG-13 rating due to violence and a running time of 1 hour and 38 minutes, this newly released movie has scored a 90% from Rotten Tomatoes.

The film concentrates on the life of Black woman, Irene Redfield, as she navigates her relationships when she unexpectedly sees her childhood friend Clare Bellew at a hotel, but hardly recognizes the woman she grew up with. Irene remembers her childhood friend as a light skinned Black woman, but with this skin tone, Clare has decided to “pass” as white in order to not deal with some conflicts Black people face in this era.

Although the life Clare lives is appealing at first, throughout the movie it is illustrated that Clare is not as content with her life as first appears to be. Irene also begins to question the morality of Clare lying to her rich white husband, and the world, about her true identity.

Passing takes a step back in time and displays what it was like for Black women in dramatically different walks of life, but they still led to becoming envious of what the other had. Clare continually risks the life she has built for herself to reconnect with an old friend who ultimately reminds her of the life she left behind the moment she decided to “pass” as white. The risks Clare takes lead her down a dangerous path, increasing her risk of being exposed, and putting herself and friends in danger.

The movie Passing carries great historical significance and is for those who are looking for a laid-back movie to entertain them. Passing not only educates the audience, but it also reveals how far society has come in terms of racial issues.

Throughout the movie only a few people know Clare’s true identity, keeping the viewers on the edge of their seats to see what will happen next and what new lies will need to be spun to keep Clare’s secret. Everyone knows Clare is playing a risky game, but no one can expect the consequences.