The Mental Health Effects of COVID-19 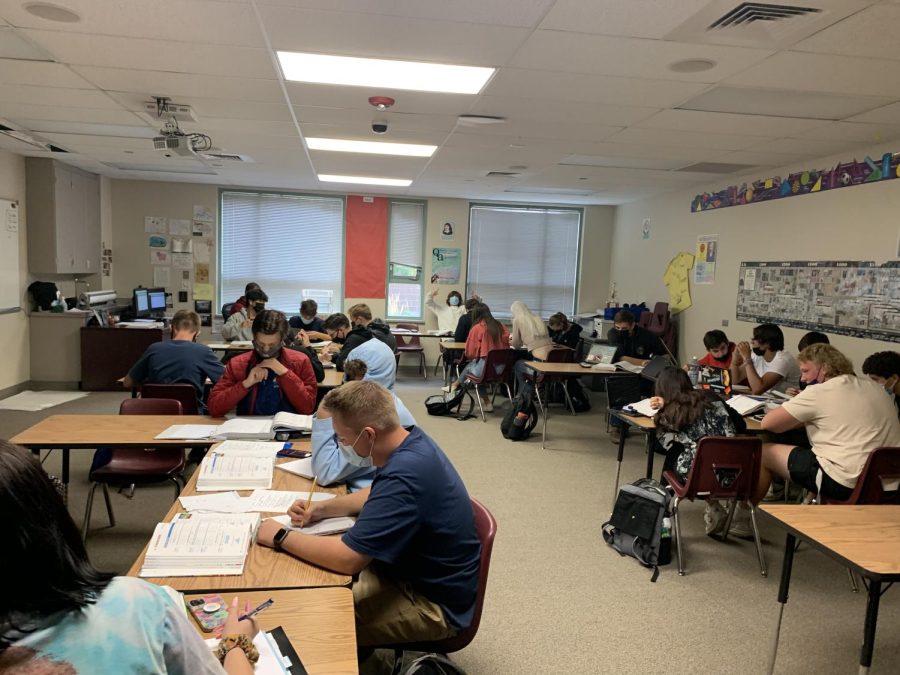 Jeremiah Behrendsen’s Algebra 2 class. As the class works, students chat with their neighbors, and laughter fills the room, along with the sound of pencils scraping at the paper.

In March 2020 the COVID-19 (coronavirus) pandemic took away two years of normalcy. Since then many people have reported their mental health decreasing. Students across the nation have chosen to express their current feelings about the pandemic via social media trends. According to Delmarva news, surveys released have shown that as mental health decreases, substance abuse and suicidal thoughts have increased.

COVID-19 infections spread via droplets in an infected person’s breath, sneeze, or cough. It then infects healthy cells in a body’s respiratory system, causing severe illness and possible death. Since March, there have been three vaccines created: Pfizer, Moderna, and Johnson & Johnson. Pfizer was approved by the FDA in December 2020.

A recent variant of COVID-19 has been discovered, the Delta variant. The symptoms are the same, but the Delta variant has caused quicker spreading and is considered more infectious than the original.
COVID-19 symptoms take 2-14

days to appear after exposure. Symptoms include fever and chills, cough, shortness of breath or difficulty breathing, fatigue, body aches, headaches, loss of smell and/or taste, sore throat, runny nose/ congestion, nausea and vomiting, and diarrhea. If symptoms are present, a test and possible medical attention should be sought.

After what felt like forever to most students and staff, school was able to move fully in person this year. According to most teachers, it seems as though students are happy to be back in school.
“I think it’s better being in school and, just like, staying in school, than switching back and forth,” Anissa Kinney (10) said.

Dakota Ridge principal, Dr. Jim Jelinek, expressed his concern about the students this year. He believes that mental health has been damaged from spending  close to two years in isolation.

“I have seen a significant increase in serious suicide risk assessments, [and] situations of mental health that require hospitalization of our youth,” Jelinek said.

The current behavioral issues in the school have led to a deeper concern in upperclassmen and staff. Many of the freshmen and sophomore students have been exhibiting immature behaviors that the staff has never seen. It is believed that the behavioral issues were caused by the near two years of missing an actual school environment.

“It seems that kids are locked into the age when COVID hit and we went remote,” assistant principal Kim Keller said.

Keller also mentions the behavior that many students are exhibiting this year. Some staff members have noted that it seems as though students forgot how to interact with others in a school setting.

“I feel like even though we’re back in school, we still have a little bit of an isolated mentality,” Keller said, “and we don’t know how to fully get back into socializing and interacting with one another,” Keller says a student told her this during a class she recently supervised.

Teachers and staff wonder why students this year are acting out. An obvious choice is the global pandemic, but there could be other reasons.

“I wonder if some of the acting out, some of the — for lack of a better term — goofiness, is a reaction to being worried that they’re [students] going to have to go back into quarantine or that they weren’t around people anymore,” Summit Ridge English teacher John O’Keefe said, “It’s why people laugh at horror movies. You see something awful happen and you laugh because you’re glad it’s not you.”

The isolation that people experienced nationwide last year has shown a correlation to the current decrease in mental stability of the general public. James Scott, Summit Ridge Middle School English teacher, has noticed that students act differently on an individual level. Outside of the classroom, Scott has noticed that some students have really struggled with coming to school this year. He said that they have cried in the parking lots and seem to have a hard time being in an actual classroom.

“I think having stayed home for a year, coming back to school has been a really emotional shock to their system,” Scott said.

Over the past year, many people have not had a social life due to the lockdown. Some chose to reach out and talk to more people online, while others stopped. Lily Bender-Stone (10) noticed that over the past year her social skills dropped and she fell out of touch with many people.

“I felt very isolated from everyone, and like, even my closest friends weren’t texting. My best friend and I went through a period of, like, half a year where we hardly talked at all,” Bender-Stone said.

O’Keefe noticed that within the school, social skills were gone.

“Have you ever come home to a dog who hasn’t seen you in a long time? And, you know how the dog flips out? That is what I’m seeing,” O’Keefe said in reference to student behavior.

Keller has also noted that students in all grades have struggled with being back and around their peers again. She believes that students are having a hard time remembering how, exactly, to be a student.
These struggles have led teachers and staff to be concerned about mental health in the school. They’re trying to keep track of students and their mental health to see if they need to reach out, but that can be difficult.

James Scott believes it would be beneficial to have parents reach out and talk to their kids about mental health, as well, in order to properly help each student.

“I think it starts with parents being willing to admit that their kids need some help,” Scott said.

Unfortunately, mental health issues often have a stigma surrounding them, which is mainly present in older generations, resulting in parents not noticing, and students not knowing how to reach out about their troubles.

In addition to the behavioral issues, schools have noticed a slight gap in education. Most teachers have slowed down their teaching. Even if students still know some of the content, many individual teachers chose to take their foot off the gas.

Mr. Scott said that lessons that may have taken a week in past years are now taking about a week and a half. O’Keefe has also noted that his lessons are taking twice as long, so that way students can catch up better. This is because staff chose to make it easier on the students with learning, due to the inattention displayed by many students online last year.

“There is no question in my mind that kids are learning less because of masks,” Scott said.

Online last year, many students reported that they struggled with reaching out to teachers and asking questions. This led to a drop in grades.

“Just because of the isolation, I kind of forgot how to talk to people, so I was scared to ask questions during class,” Bender-Stone said.

This year, Dr. Jelinek has noticed that there are 9th graders struggling with the skills needed to be successful students.

“The skills, how to be a student, what you need to do, the stamina for working through a class, doing the homework, and making sure you’re coming in to get help, and doing test corrections [are] very delayed right now,” Jelinek said.

All across the world, mental health has been affected. The issues that are found in schools are present in people of different ages, and they have only been amplified over the last year or so.

Teachers and staff want to help students to the best of their abilities. A global shutdown is a traumatic experience and likely caused a lot of stress. Students might not be aware of how to deal with that stress and anxiety.

“Teenagers and little kids, alone, you know, how can we expect you to know how to deal with it and not have it impact your mental health?” Keller said.

Students have experienced a lot of strain over the last year, and that can cause negative thoughts to arise, especially towards school and other time-consuming activities.

“[The last year] has caused, in my opinion, some mental health issues in a lot of kids who feel like they can’t do this anymore, they don’t remember how to,” World Language teacher Kat Páez said.

The main focus for helping students is to have teachers form a bond with students. If a student feels as though they can talk about their issues to at least one adult in the building, then the staff will feel successful.

“I think our best defense against any type of serious concerns is the student’s willingness to talk to us… if I know about it, then I can look at other resources, whether it’s counselors, or social-emotional, or community resources that can help provide the student and family support,” Jelinek said.

In order to move forward successfully this year, students need to reach out when they are struggling. It has been a hard year for the entirety of the world, and talking about it can help. Within the school, there are counselors for students to talk with, and many teachers are open to listening.

For help, please reach out to any of these services: