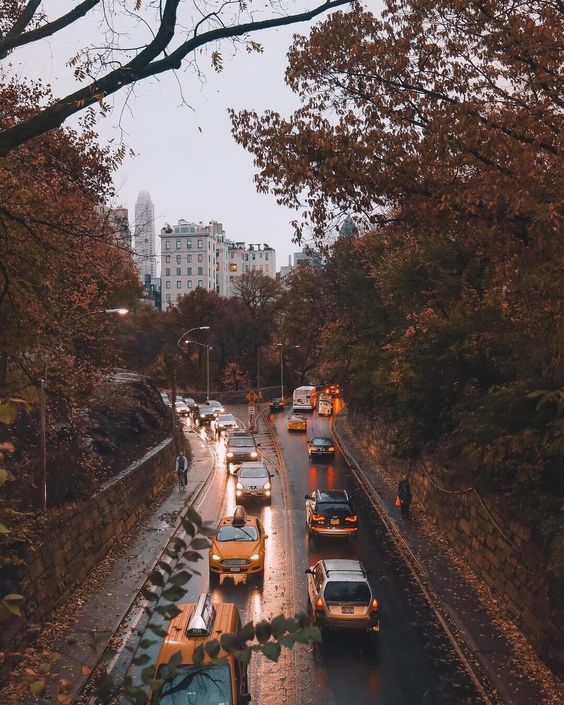 Hi, we’re Ella and Easton, the editors of The Cord for the 2019 year. Every month, we’ll be posting a compilation of our monthly favorites!

Favorite Song: “Season of the Witch” by Lana del Rey

This song is a bluesy cover of Donovan’s folk-rock Halloween classic. Lana del Rey is (clearly) one of my all-time favorite musicians, and she covered this song for the soundtrack of the October movie Scary Stories to Tell In the Dark. Del Rey was a fantastic choice to perform the song, because the smoky warble of her voice perfectly fits the vintage-inspired horror film.

Composed of smooth, pop-influenced indie hits, Cheap Queen is a standout indie album that fits the melancholic mood of October with its somber, yet vaguely hopeful, song messages. Cheap Queen is King Princess’s first full album, and she keeps the integrity of her past music with her art-deco album breakout.

I found myself getting tired of pumpkin spice lattes, so this is a great way to enjoy fall  without being punched in the mouth by an overload of cinnamon-logged pumpkin flavor, as is very characteristic of many fall drinks!

One of the few things we agree on, Easton and I both picked Big Mouth for our favorite TV show of October. With  busy academic schedules, it is often difficult to find time to unwind and watch TV, so when we do have that time, we tend to turn to lighthearted, comedy-heavy shows. Big Mouth is a hilarious, oft-crass cartoon that joins the ranks of South Park and Family Guy as an instantly iconic comedy program.

Favorite Book: We Should All Be Feminists by Chimamanda Ngozi Adichie

This book is a clear, concise manifesto that urges all people (regardless of age or gender) to be feminists. I personally define myself as a feminist, and this gave me a fascinating perspective in regards to the experiences of women in the world. Adichie is the author of The Thing Around Your Neck, a book that my English class is currently reading as a study of short stories and perspective, and Ms. Spence recommended We Should All Be Feminists as supplementary reading for me. I enjoyed this book very much! Adichie is eloquent and explicit in her definition of gender studies and roles, which is why this quick read was my pick of the month.

A Banh Mi is a Vietnamese sandwich, made with pork, jalapenos, pickled cabbage and daikon, sriracha, and fish sauce. As strange as it may sound, it’s a great lunch to grab during the school day because it’s fast and healthy.

Favorite Song: “I Disagree” by Poppy

A blend of extreme metal and modern pop, this song is a synthesis of two vastly different genres that surprisingly works really, really well. The chorus combines a heavy guitar riff with melodic auto-tuned vocals to create an anthemic pop-metal hook. I never thought I’d be writing that last sentence, but “I Disagree” is another instance of innovation in the modern music world that deserves much more attention.

To confine Macro to one genre would be equivalent to classifying all life forms as animals. Although extreme metal is prevalent throughout this album, Jinjer also utilizes jazz, reggae, electronica, and progressive elements to produce yet another genre-defying LP. Vocalist/lyricist Tatiana Shmailyuk delivers a jaw-dropping performance in both fields as the instrumental section seamlessly blends genres into emotional, exciting arrangements.

Have no fear, Nuggets basketball and Avalanche hockey have returned to free us from the dumpster-fire that is the 2019 Broncos! Both teams bring immense potential and great storylines to the season, but the most exciting to me: the Nuggets could have another budding star in rookie Michael Porter Jr., who is back from injury and fully active. In his very first minutes on the floor in the preseason, Porter Jr. nailed a fadeaway jump shot with the defender’s hand practically gripping his face. It reminded me of Kevin Durant; therefore, I’m sold. If only he could be in the regular season rotation…

That Ella and I agreed about this show’s greatness is surprising, but it makes a lot of sense. The third season of Big Mouth, released October 4th on Netflix, continues the over-dramatized story-telling of the lives of a motley teenage crew; there is awkwardness and hilarity abound. However, this show is not for the faint of heart, as its deceptively inviting cartoon monsters and animals hide an offensive humor that is, at times, uncomfortable. Despite this, anyone alive who was ever a teenager should be able to relate to Big Mouth as if it were a cousin.

Does one of your favorite bands ever suddenly drop new music out of nowhere? If you’re one of the few who knows about Puppy, chances are they did this October. The three-piece’s new EP, “iii,” is an alternative/hard rock stomper, with tunes like “Powder Blue” and “Agatha” prompting you to hum a melody while head-banging. I’ve had this mini-album on repeat for a week now, and this little present makes you ask an important question: How are they not famous by now? If you like one or all of Nirvana, Pantera, Blue Oyster Cult, or Ghost, hop on the Puppy bandwagon now before it’s too late!

When you’re in a rush to hang out with your friends at a place that isn’t school and only have a 30 minute lunch block (while also eating something), Burger King Chicken Nuggets are the way to go. Although Burger King is known for its–well, burgers–their nuggets taste great with fries and are very efficient. I can eat them in five minutes before hurrying back to school.